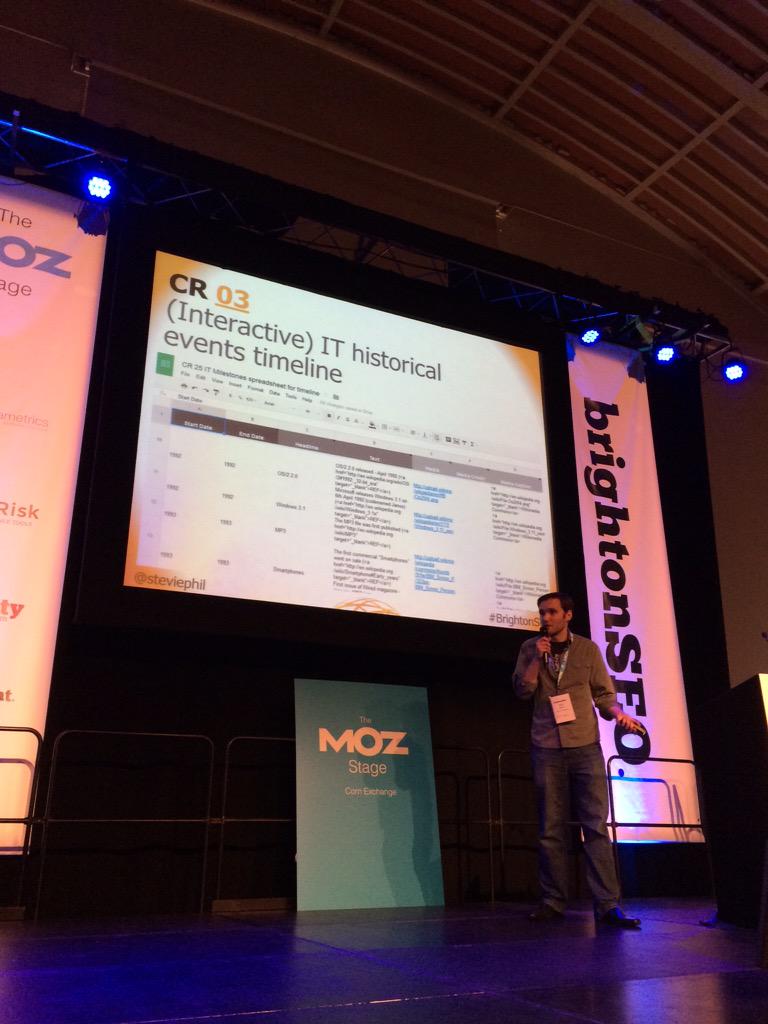 Having previously been to BrightonSEO 4, 5, maybe 6 times (I’ve genuinely lost count), it was an absolute pleasure and honour to be given the opportunity to speak about my recent CR 25 campaign, as part of the Content Strategy segment.

From the BrightonSEO website (which I’m copying-and-pasting as well, just in case it gets removed from the site at some point):

In January 2015, I helped my parents’ IT recruitment agency to launch a ‘content blitz’ campaign, posting 25 posts in one month to mark the company’s 25th anniversary.

6 months in the making, we created and co-ordinated a plethora of content types beyond the usual bog-standard blog post, including guest posts, crowdsourced posts, a timeline, a list of local events, a list of local co-working spaces… and even a quiz.

Utilising free/cheap resources and WordPress plugins as much as possible to keep the budget nice and low, the campaign was intended to boost their site’s SEO as well as the company’s branding awareness, PR, social media followings and ultimately help them to earn new clients and candidates.

Here are the slides:

Someone let me know that the talk was Periscoped (is that a verb yet?) as well – here’s a screenshot. Really exciting!

As I said towards the end of the talk / on the penultimate slide, I’m hoping to do a full write-up of the campaign – its good, bad and ugly moments – which would cover everything from the talk and more stuff that I would have liked to have covered if I had more time. I’ll most likely submit it as a YouMoz post – keep an eye out for it over the coming weeks/months.

I’d also like to say a big thank you not only to @kelvinnewman (BrightonSEO’s organiser) for allowing me to speak, but also to @MUmar_Khan, @krystianszastok, @ichbinGisele and @Tony_DWM for taking the time to give me feedback on an early draft of my slide deck. Tony especially was incredible, giving thoughts and feedback on every single individual slide. Top bloke.

What You Are
Paloalto
7 mins