Intro from Steve: I don’t often publish guest posts on SEOno, and in fact I’ve only ever published two (way back in 2013), but my buddy Gus approached me about using this post as a guest post and – given that it’s related to his recent Cardiff SEO Meet talk – I thought it made a lot of sense. Over to you, Gus…

If you work in one specific digital marketing area such as SEO, PPC, content, social or even in related jobs such as designer or brand manager, chances are that you had a conflict with someone from other departments. Each department tends to have such specific views on how things should look and what’s best for the business and clients that it’s hard to not be protective sometimes.

Obviously, this is an exaggeration, but you probably can relate to this infographic made by the Digital Marketing Institute.

Taking a step away from your role, we know everyone contributes to a good digital marketing strategy. SEO brings traffic at no cost, PPC allows you to convert quickly, brand managers protect and improve how people perceive your brand, a designer makes a website you can navigate well and trust… You get the picture.

Here at Wolfgang Digital, we’re big on integration – in fact, it’s one of our company pillars. As per my talk during Cardiff SEO Meet in March, here are a few ways to integrate SEO and PPC, whereby instead of viewing them as two separate department, you can learn from each other to ultimately improve your KPIs.

SEO is a difficult channel to prove ROI. A lot of our work gives a return in the long run, so clients tend to be more sceptical investing, only to have to wait several months before you can demonstrate results.

Once you start getting results, you can show how much traffic and conversions have improved – but it’s also possible to show how much money you saved in the process. How so? Just calculate how much they’d have to pay for this traffic with PPC.

END_OF_DOCUMENT_TOKEN_TO_BE_REPLACED

This is probably really obvious, but it fooled me, so I thought it was worth blogging about.

TL;DR – To get detailed data using the AdWords Keyword Planner when managing multiple accounts via MCC (My Client Centre), make sure that you click on the ‘Jump to account’ drop-down at the top of the screen, select a ‘big spender’ client, and then do your keyword research as normal. The priviso is that you have to have at least one client in your MCC that’s a ‘big spender,’ otherwise you may not get the detailed data. If you leave it as the default – probably your own/agency account – you may not get the data, especially if you don’t use AdWords yourself, which is what fooled me originally.

It was either a mighty big coincidence (unlikely), or their data was being lumped together (likely).

At first there was talk that it was a bug (even DMs that I had back-and-forth with the @adwords team showed that they didn’t really have a clue internally what the heck was going on), but eventually – weeks later – it was revealed that it was a permanent change. They also started to show data in ranges: e.g. “100 – 1K” instead of, say, “390”.

It was also revealed that you had to be an active user – i.e. spending moolah on actual AdWords clicks – in order to get the detailed data, and also potentially have an account that’s been running for at least a couple of months. However, as it stands, no one’s currently sure how much you have to spend in order to see detailed data vs. the generalised ranges.

My question was this: what about people who have access to other AdWords accounts via My Client Centre (MCC)? How does that factor into it?

“So needing to have active campaigns running for at least 3-4 months, with an unknown spend requirement, will mean many SEOs will have a hard time getting the detailed data unless they are able to MCC an active AdWords account that is seeing the data.”

This confused me, as I had a MCC account with at least 3 or 4 active AdWords campaigns in it (i.e. client campaigns), but whenever I tried to use the Keyword Planner, I was still getting the rough data ranges instead of the detailed data.

…And then I realised what I was doing wrong.

How to get detailed data

Whenever you access the Google AdWords Keyword Planner normally, e.g. if you visit it via Google Search or have the direct link to it bookmarked, you are taken to your AdWords account. In my case, it was Morgan Online Marketing’s AdWords account: 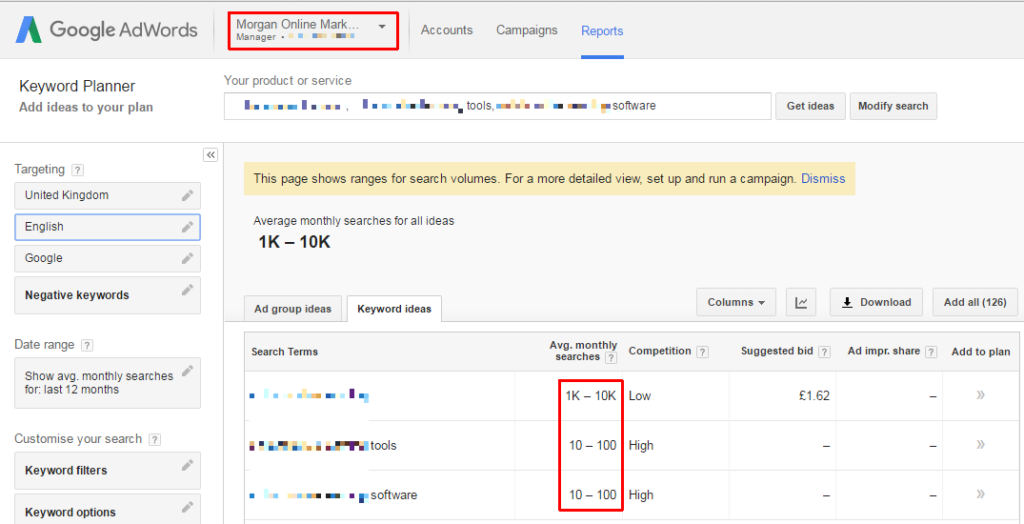 And that’s why I wasn’t getting the data: MOM isn’t an active advertiser.

END_OF_DOCUMENT_TOKEN_TO_BE_REPLACED

Update (15th April 2015) – I’ve just been alerted to the fact that Cardiff is now a target location (yay), making this entire post pretty much obsolete (boo)! Good news though.

I do a bit of work for Welsh ICE (as mentioned before) and recently looked into the possibility of launching a LinkedIn Ads campaign for them.

Assuming that it would have similar-ish geographical targeting options to Google AdWords (Google’s PPC platform), which allows you to target a city/town or a radius around any point (such as a postcode), I was surprised to learn that – as far as the UK is concerned – you can only target 30 towns/cities, ranging from Birmingham to Twickenham, and containing no Welsh or Northern Irish locations such as Cardiff or Belfast. Either side of where Cardiff would (should?) be, we have Cambridge and Chelmsford, the latter of which has half the population of Cardiff, and Hemel Hempstead (another one in the list) only has a quarter of the population of Cardiff. (Wikipedia population links for Cardiff, Chelmsford and Hemel Hempstead.)

Aside from the fact that it seems rather odd that they only offer a select few UK towns/cities, I honestly think that LinkedIn are shooting themselves in the foot by not offering more. While LinkedIn’s main focus is on B2B, and a lot of UK B2B businesses could probably cater to a UK-wide customer base, there are still businesses who are restricted by geography. For instance, for Welsh ICE, while they’d certainly like to attract more businesses to Wales as a whole, it makes sense to mainly concentrate on the South Wales region, given that they offer office space and co-working facilities. Similarly, I also have a Cardiff-based cleaning client and a storage facility provider client with two locations in South Wales – they’re only going to be interested in receiving leads from South Wales-based prospects as well, as they are also pretty much limited by geography. In other words, there could be a lot more businesses out there that’d happily use LinkedIn Ads if they sorted this out and improved their location targeting options…

However I dug a little deeper, looking at the LinkedIn Ads system’s other targeting settings, and while it’s not foolproof, I found a way that Welsh ICE can still target on a (sort of) geographical basis. Here’s how:

A lot of people stay and live in their university town after graduating, so one way could be to target the alumni of particular universities. For the Welsh ICE campaign, we could focus on Cardiff Uni, Swansea Uni, Cardiff Met Uni, Uni of South Wales, etc. By doing so, they’re effectively saying: “you’ve graduated in South Wales… now why not start a business here?”

END_OF_DOCUMENT_TOKEN_TO_BE_REPLACED

Back in May, Google introduced the Keyword Planner: a new version of the Google AdWords Keyword Tool, a handy tool for both PPC and SEO folk for keyword research purposes.

Truthfully, for keyword research projects I’ve carried out recently, I’ve simply continued to use the (old) Keyword Tool. But recently I decided to try out the Keyword Planner, which I’d heard (on the grapevine that is Twitter) wasn’t radically different to what it was replacing, as it was pretty much a merge of the Keyword Tool and the Traffic Estimator and therefore seemingly an aesthetic change that simply combined the two within a new interface.

In order to get properly acquainted with its layout, I decided to run the two tools side-by-side on a quick keyword check job.

And that’s when I picked up on something alarming…

For effectively the same tool (i.e. one tool replacing the other), the data doesn’t line up.

Looking at “it jobs” keyword suggestions for Computer Recruiter, I noticed discrepancies with both the search volume and average CPC data.

END_OF_DOCUMENT_TOKEN_TO_BE_REPLACED

I noticed something amusing a while ago that I’ve been meaning to blog about for ages. Sadly, it doesn’t seem to work anymore if you’re using a computer or an iPad, but I have noticed it recently via my iPhone…

Have you ever just tried Googling the word “keyword”? Have you seen its ads? 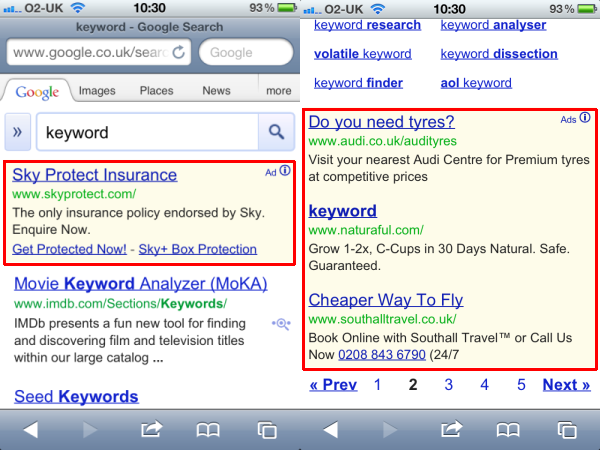 You might chance upon an ad or two offering keyword research services or a keyword tool, but what’s the likes of Audi, Southall Travel and Sky Protect doing there, bearing in mind that they’re completely out of context and irrelevant?

However, the top row itself contains the word “Keyword” as a header to the first column. So you want to copy and paste everything from row B downwards…

Of course, it’s very easy to accidentally grab row A as well, so that your new semi-duplicated ad group contains all your desired keywords as well as just the word “keyword”. On broad match. Ouch…

It really threw me when I first noticed it – I think I was typing in “keyword tool” and Google Instant showed the results (and the ads) for “keyword” before I’d even finished typing the full phrase. But for a digital marketing geek like me, I guess it made me chuckle!

How to check it

Want to check that you’re “keyword”-less? Of course you could check by doing a Google search for “keyword” and making sure that you’re not there, but if there really is a difference between the ads showing or not showing depending on which device you’re using then it could be rather time-consuming.

Your best bet is to check at the source: in your AdWords account. There might be a quicker way, but if it were me, I’d do this:

If you were affected, then hopefully impression/CTR data as well as Quality Scores will improve – at ad group level and higher – with its removal.