In the fight for SEO, the juicier the links, the better. We all want to get the best links for ourselves and for our clients – which is why we aim high and identify opportunities with high PA (Page Authority) and high DA (Domain Authority) scores. But sometimes we can get carried away and can take it a bit too far…

A while back I worked on an outreach project for a client, trying to help them get links for some pretty cool resources that they’d created. However, after accepting the work, they dropped the bombshell that they only wanted to get links from sources with a DA score of at least 30 out of 100. I pleaded with them to reconsider (making some of the points below) but they wouldn’t budge. Now I’m grateful for the work, and I adore the person who passed the project my way (he might even end up reading this), so I don’t want this to sound like I’m bitching and moaning. But I genuinely think that they shot themselves in the foot by making that decision. Allow me to explain why…

…But before I do:

First off… What is DA?

I completely understand why brands only want to get links from the biggest and best sources – those with the highest DA scores. But ironically, when conducting manual link building and outreach, only targeting the biggest sites can actually be counterproductive. Here are five reasons why:

Every website starts somewhere – usually with a DA 1 (the lowest possible DA score).

When I created and launched CR 25 18 months ago, it too started at DA 1. It was on DA 1 for a while, even post-launch – simply because DA can take a while to update. It got quite a few links from a few different domains (not tons, but a fair few), and despite getting little attention this past year (as it was a one-off project), it’s now sitting at DA 19. That’s not too bad.

Tech Dragons – a brand new news site documenting Welsh tech startups – already has 44 linking root domains pointing to it according to Majestic, and yet it’s DA 1, simply because it’s new. I bet it’s going to jump to DA 20-30 very soon, if not higher.

Heck, even businesswales.gov.wales – the new domain for Business Wales, a Welsh Government-led initiative – is currently DA 1. But I guarantee that getting a link from a site like that is not something that Google’s going to ignore in a hurry.

“Mighty oaks from little acorns grow,” as the saying goes. Just because a site isn’t DA 30 now, it doesn’t mean it won’t be in the future.

On the project I mentioned above, we had a particular niche that we were targeting. What was weird (and frustrating) was that I found lots and lots of easy-to-grab opportunities in the DA 20-30 range – but obviously this didn’t fit the criteria, as we were only targeting opportunities of DA 30 and upwards. This almost felt like a shame, as we were missing out on quite a few that could’ve been worthwhile – especially if we’d gotten a fair few of them sorted.

After all, despite DA being logarithmic, a few DA 20s are probably going to be better and worth more than one DA 30, so to me it didn’t make sense to outright ignore them.

The issue we found with the DA 30+ sites is that they did either one of two things:

They ignored us, because hey – they’re a big site and we’re coming along and asking for a favour (a link). Why link to us when they’re already linking to other similar resources?

Either that or they asked us to pay money to be listed / to advertise, because – surprise, surprise – they probably get quite a few requests like this (given their high DA score) and they’ve learnt to monetise the process. I’m not a big fan of sites that do this, but who can blame them eh? Unfortunately the client didn’t want to pursue any paid opportunities either, which is fair enough, but made things even harder for us when trying to get links.

4) DA is seemingly getting lower (making it even harder)

Moz say it themselves: DA fluctuates, as they make adjustments over time. In my own personal experience, for sites in the DA 20-40 range, DA seems to be getting lower for most sites – even if said sites get more links over time. I’ve lost track over time, but SEOno had a DA of about 35-40 at one point, but dropped down to 33-34, and now it sits at 32. It’s not because the site’s becoming less authoritative or because it’s getting less links – it keeps gradually getting more. The drops mostly coincide with when Moz announced that they’d rejigged their DA algorithm.

At one point during the project, I found an opportunity that was DA 32 – just over the minimum threshold. Then Moz did an update, and it dropped to 29. I could’ve screamed… It was a proper “FML” moment, I tell you. In this instance we carried on with it (as we were already in the process of getting it sorted), and I very much doubt Google would’ve seen the link much differently, despite the slight technical adjustment at Moz’s end. It also meant that trying to find DA 30+ opportunities after the update got a little bit harder, as a bunch of other low 30s probably dropped to high 20s and ducked below the minimum. Frustration aplenty.

5) It’s not natural (which could get you into trouble)

A few years ago I wrote a YouMoz post analysing natural links pointing to Wikipedia articles. Looking at the inbound links of 15 pages chosen at random, what was really interesting to see was that the majority of links pointing to them actually came from sites in the DA 10-20 range: 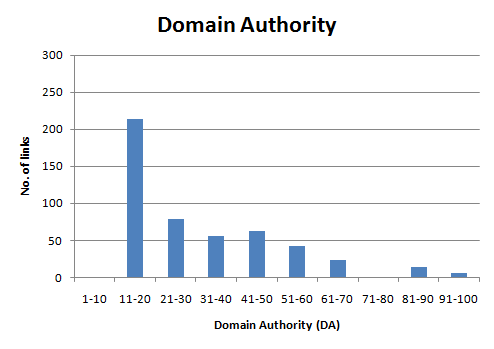 Therefore I would go so far as to argue that only getting links from DA 30+ sources could look a little ‘forced’ – maybe even a little bit spammy in the almighty Google’s eyes.

Now the folks at Google are a smart and savvy bunch… Who knows, perhaps they weigh this type of behaviour into their spam detection systems. Either way, whether they do or not, would you want to chance it…?

More things to think about…

There’s a few lessons here, plus a few other points I’d like to make, so let’s go over and expand on some of the points:

Ultimately, every link opportunity should be analysed carefully on an individual basis, and not just cast aside the second you realise that it has a low DA score or that doesn’t hit a particular threshold that you’re targeting. Yes, we all want the high DA opportunities, but don’t let that distract you from the bread-and-butter.

[Rogerbot Dali image credit – my own creation, using Prisma to make it all arty-lookin’…]

Into The Floor
Afghan Whigs
2 hours

Underneath the Waves
The Twilight Singers
2 hours